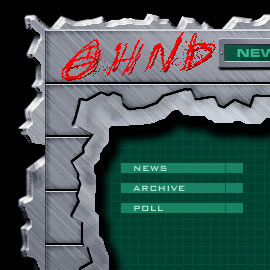 Old Habits Never Die (OHND) was my first international project. In 2002 I was involved in Deus Ex game community (see my other project from that period, deusex.pl). When I learned that some group of enthusiasts is going to create an ambitious game modification using Deus Ex engine, I decided to help them as a webmaster.

OHND mod was supposed to tell a story in the universe of System Shock 2 (SS2), probably the best sci-fi horror ever created. SS2 didn’t offer development tools, so the people behind OHND decided to use Deus Ex engine. Deus Ex is set in a similar setting and in many aspects is a game similar to SS2.

The design I created was inspired by the hi-tech interface of System Shock 2. It features signs of destruction and wearing out, omnipresent in the game.

Unfortunately, making games is a hard business and eventually the project was abandoned. However, I had a fun making such an interface and co-operating with an international team behind the modification.